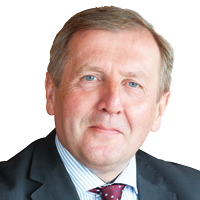 Minister for Agriculture, Food and the Marine

The agri-food sector is Ireland’s largest indigenous industry, which employed over 173,800 people, or 7.9% of total employment, in 2017, contributing 7.8% of GNI* (Modified Gross National Income), and accounting for 11.1% of merchandise exports – a record €13.6 billion in 2017. The sector is of critical importance to the Irish economy, and its regional spread means it underpins the socio-economic development of rural areas in particular.

The decision of the UK to leave the EU has the potential to significantly impact on the sector. In 2017 some 38% of Ireland’s total agri food exports went to the UK, while 48% of imports were from the UK. This clearly reflects the highly integrated nature of agri-trade between the two countries, built up on the basis of trust, quality and confidence over many decades.

Within these export figures almost 50% of our beef exports go to the UK, 22% of our dairy products, 47% of our cheddar cheese, over 60% of our prepared consumer food, and almost 100% of our mushrooms.

The short-, medium- and long-term effect of Brexit

The initial impact of the Brexit vote on the sector has been the effect of sterling volatility on those businesses that have a significant trading relationship with the UK and this drop in currency value continues to have a negative impact. In the medium to long term, the threats from Brexit include the possible introduction of tariffs on trade between the EU and UK and potential divergences in regulations and standards between both countries post-Brexit.

These challenges are being addressed through a range of measures which I have introduced as part of the Food Wise strategy to support the sector in preparing for the uncertainites of Brexit. The measures include: an intensified focus developing new markets through trade missions, and other actions such as additional resources for Bord Bia; low cost loan schemes developed for farmers and food SMEs; new agri-taxation measures; increased funding under the Rural Development and Seafood Development Programmes; as well as additional investment in research and innovation.

Shortly after the Brexit Referendum result I established a Consultative Committee of Stakeholders to ensure a full exchange of information on the potential implications of a UK exit from the EU for the Irish agri-food and fisheries sectors. The work of this Committee is ongoing, as I and my officials continue to engage at a very detailed level with our stakeholders. The engagements affords me and my officials the opportunity to get a full understanding of the actual and potential challenges likely to be faced by stakeholders in the event of a hard Brexit and an opportunity to fully update them on the negotiation process. It also enables me to have effective and relevant input to the negotiations through the ‘whole of government’ approach being coordinated by the Tanaiste and his Department.