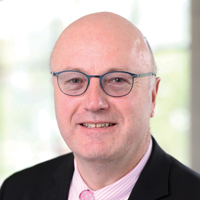 Ireland is ideally suited to push back the frontiers of science because it has a wide array of excellent researchers working in fine universities across the entire country.

The geographic spread of talent in diverse specialities has resulted in a research landscape built on partnerships and collaboration, which are vital for research success, according to Professor Mark Ferguson, Director General of Science Foundation Ireland and Chief Scientific Adviser to the Government of Ireland.

“It means we’re not as centralised as some countries and so there’s a history of collaborating to bring out the best we have to offer.”

This collaborative approach is evident in how the Science Foundation Ireland’s €172m annual budget is put to best use. Rather than award grants to fully fund certain projects, the Foundation will instead cover a third of a team’s cost, so long as the remaining two thirds is supplied by industry and another funding body, often the EU’s Horizon 2020 programm.

“We never fully fund certain projects such as the SFI Research Centres, because we want to make sure the researchers have been able to demonstrate to another funding body, and to industry, that their work will have impact,” Professor Ferguson says.

“It’s not always about being the next unicorn, nice though that would be, but by showing their work will improve health, education, the environment or the economy.”

This requirement to win over the support of another science funding body and industry underlines a drive towards collaboration for research in Ireland. Science Foundation Ireland always accesses the best minds in science from around Europe to investigate whether a project should be funded. By removing peer review from Ireland, Professor Ferguson believes not only is nepotism avoided but a more diverse range of ideas are funded.

You can’t get funded just because you know the right people, you have to prove the merit of your work.

“That helps us get projects funded that are as diverse as using sensors and the Internet of Things to spot sick cows whose milk may be infected to establish how new flight control systems for drones might be drawn up.”

The wide scope of collaborative research programmes, made possible by partnering with industry and funding bodies, has also helped ensure Ireland is well on its way to hitting its Horizon 2020 ambitions. Ferguson reveals the government’s target of securing €1.25bn from the European research fund, which closes in two years, is looking highly achievable, given current rates of grant allocations.