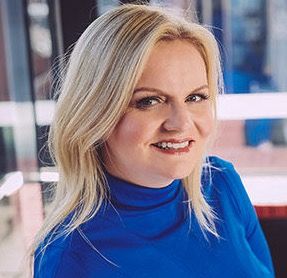 CEO of Moment Health and Founder of Lean In Ireland

Nuala Murphy is the CEO of a maternal mental health app, she shares the secret to her success: her Lean In circle.

Reaching out for support

In 2013 Nuala Murphy was at an all-time low. Juggling a baby, pregnancy and starting a new job, she desperately needed support in her career and life, when she read Sheryl Sandberg’s groundbreaking book Lean In.

The struggles I was going through were in fact global issues for women everywhere. I was not alone.

“I was astounded to discover that the struggles I was going through were in fact global issues for women everywhere. I was not alone,” says Nuala.

She decided to reach out to colleagues for support and started a Lean In circle with just four members sharing their dreams and challenges. By the end of the year membership had grown to 100.

And now in 2017, just four years later, Nuala is the proud founder of thriving Lean In chapters in Belfast and Dublin with circles spreading like wildfire across Ireland with 1200 enthusiastic members.

At 37, with two young sons, aged four and two and half, she is powering ahead as CEO of her own tech company, rolling out the innovative new app Moment Health, which provides maternal mental health support worldwide. And she has been recognised with prestigious business awards.

“I could not have achieved this without my Lean In circle. I developed leadership skills I didn’t know I had through surrounding myself with supportive people. I’m not unique. We all need the right kind of support to achieve our ambitions,” she says.

Nuala wants to encourage women to join Lean In circles where they live and work.

Speaking up, with back up

“The core themes we explore are confidence through knowing your values and finding your voice through the power of peer support.

I developed leadership skills I didn’t know I had.

She elaborates: “Research tells us that a woman might contribute to a meeting and be ignored, then a man says exactly the same point and the idea is attributed to him. Having a colleague in the room to amplify what she’s said helps to recognise a woman’s contribution and raise her profile.”

The vibrant monthly meetings provide an opportunity for members to share openly, listen deeply and learn together with panels of expert speakers fielding questions.

Circles are diverse with women of all cultures and ages and stages of their careers warmly encouraging each other. And men also attend events.

Success looks different to everybody, it’s about defining your success.

She believes in the motto: ‘If you want to go far, you go together’. You have to share success, there’s no point in having it on your own. Success looks different to everybody, it’s about defining your success. Once you work it out, surround yourself with the right people who will help you get there and celebrate your successes.

“Lean In circles are very open and inclusive and real. We’re not pretending to be Wonder Women! Joining a circle is a real way to build your confidence and build a team around you to achieve your goals.

“Everyone in the workplace suffers from bias. The more we’re aware of it, the easier it is to adjust our behaviour.

“Having access to networks can be difficult for women. By creating our own network allows us to gain access to other networks.

Our recent Be Brave event encouraged going for that job, connecting with people, speaking up for what you want, surrounding yourself with the right people to help you achieve your goals.

Sharing everything is the key

“Nobody has all the answers. We need to stop giving ourselves a hard time for not having all the answers and realise it’s really special when you open up and share your fears and challenges and successes with others. When you give something of yourself and support and encourage somebody else, the rewards come back tenfold.

Nuala wants to see women becoming leaders. She says: “If we have more females across the infrastructure of society we might have better healthcare and better education because these life-enhancing services are what women value the most.”