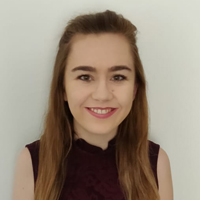 A female chemical engineer who talks to primary and secondary school pupils about STEM careers says it’s imperative to show girls that maths and physics are not “boys’ subjects”.

Emer McDonnell remembers choosing A Level physics in sixth form, but then discovering she was the only girl in her class. She shrugged it off. “It didn’t bother me,” she says. “But it’s the sort of thing that might bother other people. So, we have to ensure that girls don’t see science and maths as ‘boys’ subjects’.” The best way to do that is by getting them involved and interested in STEM as early as possible.

It’s why Emer — who is currently on the third and final year of a graduate scheme at industrial gases company, Air Products — regularly visits primary and secondary schools to perform presentations and demonstrations as a Science Ambassador for the company. “Last week, I was at a primary school doing experiments with liquid nitrogen,” she remembers. “The reaction from the kids is great. They think the experiments are cool, but then I get the chance to talk to them about what I do. At secondary schools I talk to older students about the subjects they need to study at A level to be able to apply to engineering degrees at university if they’re interested in a job in engineering.”

When I began looking at university options, I thought chemical engineering offered a great mix of problem-solving and using the sort of science skills I enjoyed.

It’s good for children of school age to see a young woman in a chemical engineering role. “It shows them that anyone can be an engineer — not just older men,” says Emer, who believes the gender balance in STEM is steadily improving.

For instance, when she was studying chemical engineering at Queen’s University in Belfast, there were 15 women out of a cohort of 45 or 50 students. “That’s quite a high number, so I never felt outnumbered,” she says. “Plus, my sister is a chemical engineer; my team manager and supervisor at Air Products are female, and half the team are women. From my experience, things are getting better, so I feel there shouldn’t be any barriers to women who are interested in joining the industry.”

A range of career possibilities

Emer took maths, physics and chemistry at A Level, simply because she was good at all three subjects and enjoyed them. “I wasn’t really thinking about a career in STEM at that stage,” she admits. “But when I began looking at university options, I thought chemical engineering offered a great mix of problem-solving and using the sort of science skills I enjoyed. Plus, it was a hands-on subject that presented lots of different job opportunities.”

She was right. In fact, says Emer, studying chemical engineering opens up a huge range of career possibilities. “With a chemical engineering degree there are so many different industries you can go into and so many different jobs you can do. I would tell anyone interested in it: ‘Make sure you do your research and understand what it involves. But if you do that, there’ll be nothing holding you back.’”