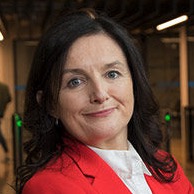 It may take over 100 years to achieve full equality in the boardroom. Use these five top tips to emulate Head Of Linkedin Ireland Sharon McCooey, who is pushing the clock forward and closing the gender gap.

Only six per cent of companies in Ireland have a woman on their board, despite the World Economic Forum’s 2016 Global Gender Gap study ranking Ireland as sixth best in the world when it comes to workplace gender equality, behind the Nordic countries. However, McCooey looks to take leaps and bounds ahead of the rest with gender equality, diversity programmes and ambitious female management.

Only six per cent of companies in Ireland have a woman on their board.

A recent report from Accenture says women are vastly underrepresented in science and technology-based careers that will drive the industries of tomorrow and shape all our futures. Reasons range from poor re-integration for working parents to intangible recruitment bias. In the face of such a gender disparity, Sharon McCooey, Head of LinkedIn Ireland believes in – and successfully implements – a truly proactive approach to these issues.

“It’s a societal problem… there is no one answer, but if we work together as individuals, as organisations and certain membership organisations, we can come together to solve it.”

After graduating in Business from University College Dublin and working across a number of different industries in high-level multinationals, Sharon McCooey discovered her true passion in the tech sector in 1993.

McCooey has become a leader in ethical practice and recruitment.

“The constant innovation, being at the cutting edge of technology and being able to work with such an amazing and diverse group is what brought me to tech.”

McCooey has worked in four different organisations where she established the Irish branch of operation among other multinational project-based work in Europe and Asia before dealing with the trials, tribulations (and, of course, romance) of motherhood.

Having taken three years out to look after her two young children before finding her current role, McCooey had “personal experience with what it is like to come back after an extended period… It’s not always easy.”

This personal experience and passion to address issues of inclusion, diversity and the gender imbalance has lead to McCooey being a leader in ethical practice and recruitment.

There is a strong financial argument for diversity in the workplace with studies indicating that companies with a diverse workforce are 35 per cent more productive and, for every 10 per cent extra of gender balance achieved in a company, the profitability will rise by 3.5 per cent.

With a 50:50 gender split across 1,200 employees (and over 64 nationalities) the benefits are clear to see at the €85 million EMEA high-spec office in Dublin.

“When compared with other companies around the world, our ‘Employee Voice Survey’ score is extremely high,” says McCooey. “You will feel that energy and general wellbeing if you walk into our building, which you are more than welcome to do any day of the week.”

High retention of talent and high employee satisfaction scores indicate the potential impact of a  diverse workforce. “Those two things will tell you we have a happy workforce who stay with us. Our employees feel successful and our business is successful as a result of that,” says McCooey.

Creating a balanced workforce is difficult for STEM organisations with issues on the supply side that start in the education system.

“Each stage of the way we drop off potential applicants to such an extent that, by the time applicants come out of college, there is generally a bias already in the system.”

McCooey attempts to ensure balance and equal opportunity through education, training and diversity in the recruitment process. “We do lots of bias training and ensure a diverse range of people from different backgrounds are involved in the interview process,” says McCooey. “This is a really enlightening experience for everyone, having the terminology to help call out biases has really helped us. It’s supremely important”.

McCooey has further ambitions to provide support services that extend beyond the walls of her own Dublin office with the new ‘ReturnIn’ initiative to offer training and employment for those returning to work from extensive leave, rolling out for 10 employees in 2018.

“If it works here, we can see this being implemented globally. There is a social need and untapped potential within this pool of talent,” says McCooey.

Citing an ever-increasing pool of positive female role models in tech, McCooey believes the future is bright for women in tech.

The ambition of McCooey and her team to spearhead innovative and inclusive programmes for their employees and the wider community is a ‘continuous journey’ of positive business practice for both women and men.

“Gender imbalance and a lack of diversity in the workplace is a large problem and we need to work together to solve it” say McCooey. If more leaders and organisations take a proactive approach, the gender gap in tech may well close sooner than the turn of the century.